How to convert Blu-ray to VR headset supported video format?

A virtual reality (VR) headset is a head-mounted device that provides virtual reality for the wearer. VR headsets are widely used with computer games but they are also used in other applications, including simulators and trainers. You probably got that Oculus Quest, HTC Vive Pro Eye, or Pimax 8K to play games, but VR can also offer a seriously immersive video-watching experience. Want to experience your favorite movies with the next-generation virtual reality technology on your VR Headset? The good news is that you can watch movies 2D movie, a 3D movie, or a full 360-degree movies on VR easily. Can we play purchasde 3D Blu-ray movies or other 2D Blu-ray discs on our VR? What video formats supported by VR Converter, such as Oculus Rift, HTC Vive Pro, Samsung Odyssey...? Here is the Blu-ray to VR Headsets workflow tutorial for you.

We can watch video resources from VR's app, but the frustrated thing is that you cannot directly play Blu-ray on any VR Headset for it does not included a drive for playing Blu-ray discs and a Blu-ray player software for playing Blu-ray files. What's more, many VR Headsets can support 3D videos in MP4, MKV, AVI, WMV, MOV side-by-side format to play. To work this out, the only route is to rip 2D or 3D Blu-rays to VR headset supported file type. As the most widely used format, H.264 MP4 has been recognized and loved by everyone. So we can convert Blu-ray to H.264 MP4 via third-party software. To finish this task, a professional Blu-ray Ripper is needed. You can try Acrok Video Converer Ultimate (Windows Version | Mac Version) to do this job.

Acrok program is an all-in-one workflow for all VR Headsets. With it, you never need to worry about the Blu-ray content for VR playback. You can create 3D SBS video for VR headsets out of various source and adjust A/V parameters to fit in your VR headset specification to get better 3D effect on the VR headsets' video player. You even can trim video footage, crop video black area, add external subtitles to video, replace audio from video, etc. Now, let's see the Blu-ray ripping and converting functions that can be used for VR headsets in detail.

This guide takes the Windows version screenshots for example. The way to convert Blu-ray to VR Headset on Mac OS is the same. Just make sure you get the right version.

Insert Blu-ray disc into external BD driver on your computer. Install and run Acrok Video Converter Ultimate as the best Blu-ray to VR Converter on your PC. Click "Load Disc" to import your videos. You an load Blu-ray ISO, Blu-ray folder, DVD disc, DVD ISO/IFO, DVD folder and any downloaded movies into this program by clicking "Add files".

From the official data, we know that all VR Headsets accepts H.264 MP4 perfectly. Just click "Format" bar on the interface then navigate to "Common Video" to choose "H.264 MP4 Video" as the output format.

Click "Edit" icon then move to "3D" option, click SBS icon. You will can create 3D SBS video for your VR Headset. 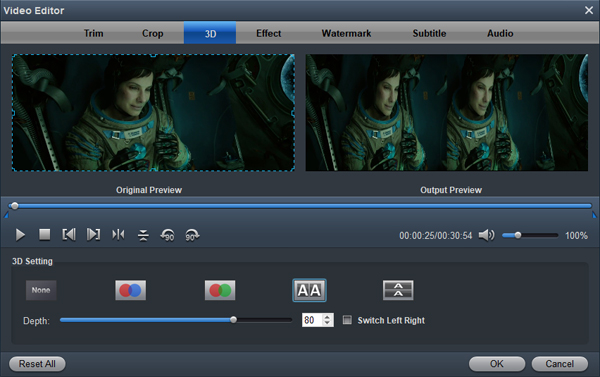 When finish customization, click "Convert" button to start converting Blu-ray or other movies to 3D MP4. After conversion, click the "Open" button in the main interface to find the output videos. With three simple steps, you can convert Blu-ray to VR Headset playback format with fast speed.

Powerful video converter for converting 4K footage and Blu-ray movies. The editing software profiles are useful. They are easy to select and the output quality is well. This as a great piece of software easy to use with great results.
Julie LaPlante