How to enjoy 4K Blu-ray discs?

First, you’ll need to make sure your Smart TV or HDTV supports HDMI 2.0 standard or above. Most of TVs released from last year to now have supported HDMI 2.0, but the old models released before 2014 might not support. Check your TV manual or Google the model number to find out – the even newer HDMI 2.1 standard should be fine.

Also, only the newest TVs released after 2016 support HDR technology. That’s because HDR requires TVs that can display more colours and have a higher peak brightness. You can still enjoy Ultra HD Blu-ray without an HDR-ready TV, but you will not enjoy the benefits of HDR.

Finally, there are only a few Ultra HD Blu-ray players for purchase in market – The still impressive Panasonic DMP-UB900. The newer, equally excellent Panasonic DMP-UB700. The slightly cheaper, but still very good, Samsung UBD-K8500. But for portable viewing, the computer and external Blu-ray drive is inconvenient to carry along with you, so maybe ripping 4K Blu-ray to many portable devices is a better choice. 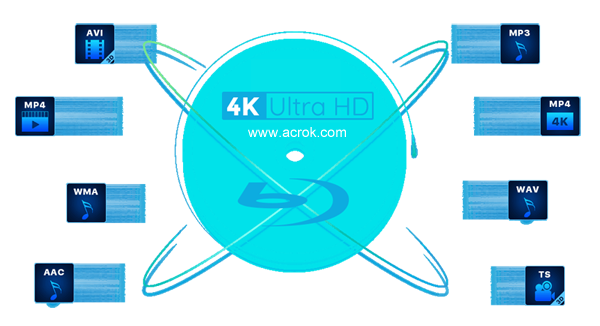 4K Ultra HD Blu-ray movies are becoming increasingly popular day by day. I believe we are able to get 8K videos on discs but they will be huge since it can be 80 GB for a two-hour long 4K Blu-ray and 45 GB for a 1080P Blu-ray. What if you have no 4K Blu-ray Player or have no plan to buy one? Don't worry! There are always solutions out there. You can use a Blu-ray ripping tool to rip/convert 4K UHD Blu-ray to digital files for streaming to 4K digital device without needing a 4K Blu-ray player.

A best 4K Blu-ray Ripper - Acrok Video Converter Ultimate is a program that converts a 4K Blu-ray, 1080P Blu-ray movie into a file, typically the ISO format, which is helpful when you want to back up a movie for safekeeping or convert a disc to a file for playing on your TV, smartphone or tablet. Can we get a free 4K Blu-ray Ripper to rip and convert 4K Blu-ray disas? The answer is NO.

4K Blu-rays can be ripped to a number of video file formats such as MP4, MOV, M4V, WMV, MPG, FLV, MKV, or AVI. Presets for HDTV, Smart TV, Apple, Android, Microsoft and more are available for ripping Blu-rays to device-compatible formats if you don't know what file type to choose. You can also rip and convert 4K Blu-ray for editing in editing software, such as FCP X, iMovie, Premiere Pro CC, Vegas Pro 17, DaVinci Resolve 16, etc.

Many advanced options are available before you start the 4K Blu-ray rip, so you can change the video resolution, crop the video, adjust the audio codec, choose a different frame rate, merge titles into one file, exclude titles, add subtitles, and more.

200+ video audio codecs: To further follow your bent, the abundant profile library is geared up for NAS streaming, SNS sharing, file compressing, and for EVERYTHING.

4K Blu-ray to ISO: This 4K Blu-ray ripping softwre enables you to make an uncompressed and genuine copy of the original disc, with intact quality. It keeps the original structure, video/audio tracks, menus, chapters and subtitles, without a shred of quality reduction. The ISO image can be further burned to another optical disc or mounted as a virtual drive.

Note: If you prefer watching 4K video on portable devices, please make sure your laptop/smartphone has a 4K-supported screen; otherwise your digital devices will still play the 4K video in lower resolution.

How to rip and convert 4K Blu-ray movies?

Note: When importing a 4K Blu-ray disc, please make sure that your PC has been equipped with an external or internal Blu-ray drive to recognize your 4K Blu-ray disc. Here the steps to rip 4K Blu-ray to a common format in Windows (Windows 10) are illustrated. The way to convert 4K Blu-ray files on macOS Catalina is almost the same as that in Windows. You just need to make sure you have downloaded the right version.

To better compress your movie and play the converted movie on more devices, you can choose 1080p MP4 as the output format.

Tip 1: Click "Settings" button, you are free to tune/customize the parameters based more on personal requirements. If you like, you can merge Blu-ray clips into a new video file.

Tip 2: Set H.265 MP4 or H.265 MKV as output format. The final videos bring you the smaller size as possible with near zero quality loss.

Last, click the "Convert" button to start ripping and converting 4K Blu-ray movies to any format, any device, any editing software, etc. And then you can fully enjoy Blu-ray disc on portable devices whenever and wherever!

How to backup 4K Blu-ray movies to PC?

That’s a whole lot of trouble to back up a disc, but there might be a workaround coming soon for all BDXL drives, including newer types that support AACS 2.0. In the meantime, if you have a capable drive, then say hello to Acrok Video Converter Ultimate. Ultra HD Blu-ray uses standard Blu-ray media, it’s just stores different data in a slightly different way.

Copying Blu-ray discs is a technical and often confusing process. The best 4K Blu-ray copy software distills the process down to its simplest form. The intuitive even childlish interface makes each person know the meaning of each button and the next step. 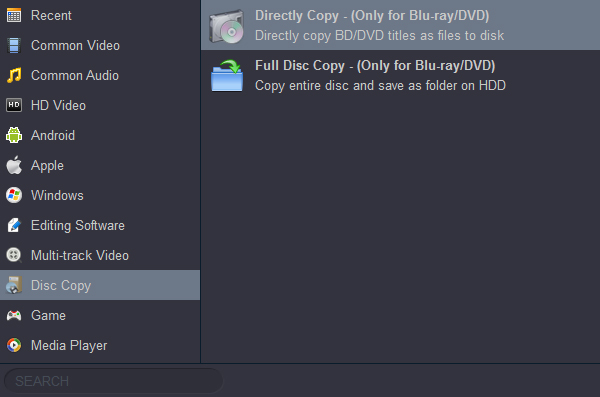 Note: The backup option is a great way to protect the 4K Blu-ray discs we purchased. You can't play these backed up 4K movies on your tablet or TV directly. You have to convert the 4K Blu-ray movies to a common video format.