Part 1: What media formats are supported by Plex?

What media formats are supported by Plex? Like other XBMC-derived media players, Plex uses FFmpeg and other open source libraries to handle many common multimedia formats. You can add the common formats into Plex media library and play them smoothly.

Can Plex play 4K or 1080P Blu-ray files? Files such as ISO or IMG and folder structures such as VIDEO_TS or BDMV are generally referred to as "disk image" formats because they're basically "cloning" the structure and content from a Blu-Ray or DVD optical disc. Plex does not support the use of the "disk image" formats. If you wish to use those with Plex, you should convert them to a compatible video with a Blu-ray ripping software.

Can't stream Blu-ray movies on Plex? Don't worry, you can rip the 1080P/4K Blu-ray disc/folder to Plex supported video audio formats. Then you can make the Blu-ray disc playback on Plex freely and smoothly.

Though Blu-ray movies are much more complicated than ordinary ones, there are also some Blu-ray ripping programs that can decrypt commercial Blu-ray and convert them to various popular video/audio formats. Whicn one can remove BD+, region codes, Cinavia, High-bandwidth Digital Content Protection, UOP, AACS, Digital rights management and BD-ROM from Blu-ray discs? Along with some help from third party program like Acrok Video Covnerter Ultimate (Windows 10 included) is just one of the best Blu-ray to Plex Converter. With this best Blu-ray Ripper, you can fast rip video/audio from Blu-ray (Blu-ray disc, Blu-ray ISO, Blu-ray folder) and convert them to Plex best playbak format or other formats, such as MP4, MOV, AVI, WMV, FLV, MKV, VOB, MP3, OGG, WMA, etc. for playing and sharing anywhere you like. If you're using a Mac, turn to Acrok Video Converter Ultiamte for Mac, which allows you to convert Blu-ray files on Mac OS X. Now download the right version according to your situation and follow the steps below.

Part 3: How to rip Blu-ray for Plex Media Server?

Insert the 1080P or 4K Blu-ray disc into your computer's hard drive and run this best Blu-ray Ripper. Then click "Load Diac" and import your Blu-ray movies. You can also add Blu-ray ISO, Blu-ray folder to rip. As you can see, you can preview the loaded Blu-ray movies in the right preview window and select Blu-ray audio track/subtitle. Double click the preview window to view the imported movie with full screen.

Then select an output format. Since there are numerous video presets for Plex like MP4, MOV, MKV, etc., you can select a format from "Common Video", "Common Audio", "HD Video" or "4K" category. The H.264 MP4 is your best choice here.

Tip 1: If you plan to play the Blu-ray movies on your iPhone or Android smartphones, please choose output format under "Apple" or "Android" category. For example, you want to watch your Blu-ray mvoeis on Galaxy Note 10, you can set "Samsung Galaxy Note Series Video (*.mp4)" as output option.

Tip 2: The default setting works well. Of course, if you want to customize video and audio encoding settings, just click the "Settings" button to customize these settings. You can adjust the output video/audio resolution, frame rate, bit rate, etc. to customize the output files to get the best quality you want.

When all the settings are done, click "Convert" on the lower right to begin ripping the Blu-ray to H.264 MP4 for Plex. When the conversion finishes, click "Open" to locate the ripped video/audio files and now just enjoy them with Plex as you wish.

If you have more streaming subscriptions than you can count and need to access them all at once, Plex Media Server is your new best friend. Plex gives you one place to find and access all the media that matters to you. From personal media on your own server, to podcasts, web shows, and news, to streaming music, you can enjoy it all in one app, on any device. 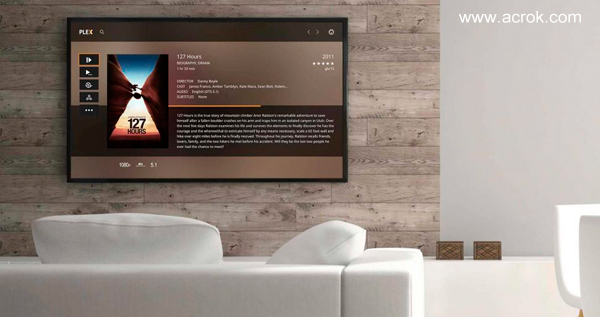 Steps on how to play converted Blu-rat moveis on Plex

1. Install and run the Plex Media Server on a computer. Plex allows you to choose from several different platforms, including Windows, Mac, Linux and FreeBSD, as well as network-attached storage platforms like Netgear and Western Digital.

2. Add media libraries by type of content and let Plex do the rest. The Plex site will walk you through the process of adding media. Just click Add Library to import whatever files you like, from movies to music to photos. Locate the converted Blu-ray movies then add them into media libraries.

3. Install and open the Plex app on virtually any device.

4. Wherever you are, press play, sit back, and enjoy your media as it streams from the Plex Media Server to your device.

After trying to use vlc and numerous other programs this one is the one that actually worked. With a user friendly UI and lots of options in the menus this is by far the best ripper of them all.
Chin Sien Moon