What formats can playback on Xbox series?

How to Play Movies From USB to an Xbox? If you purchased an Xbox Series X, Xbox One X or Xbox One S, you may be able to use it to watch movies that you have downloaded or copied from your computer. Exactly what movies you can watch depends on your set, the video files and possibly even the USB drive itself. A range of variations and restrictions means that USB playback often shouldn't be a key deciding factor when choosing a set.

Do not simply assume that because your Xbox has a USB port, it can play files from a USB drive. In some case the port is solely designed for use by engineers who need to run software on the Xbox , for example to update or repair the set.

If you plan to enjoy movies on Xbox from USB, the main factor that affects your ability to watch a particular video is the file format. You will need to consult the user manual or promotional material for the particular set to see which formats it supports. Some sets will only play a video in a supported format if it is at a specific resolution or within a particular range of resolutions. All these limitations mean you may need to convert or re-encode some video files to watch them through USB on your particular set.

Even if you are using the correct formats, you may still run into problems with watching videos from a particular USB drive. You may have to format the drive to a particular file system such as FAT, FAT32 or NTFS. Your set may not be able to show files that are stored inside folders on the drive. Your set may be limited in the length of filenames it can display, or be unable to show unusual characters in a filename. It's also possible your set only supports USB drives of a particular range of capacities.

To play all downloaded MKV, MOV, AVI,WMV, MP4 on Xbox Series X, Xbox One X and Xbox One S from USB, you need to convert the video to Xbox Series supported format.

Profile for Xbox Series X, One X and One S 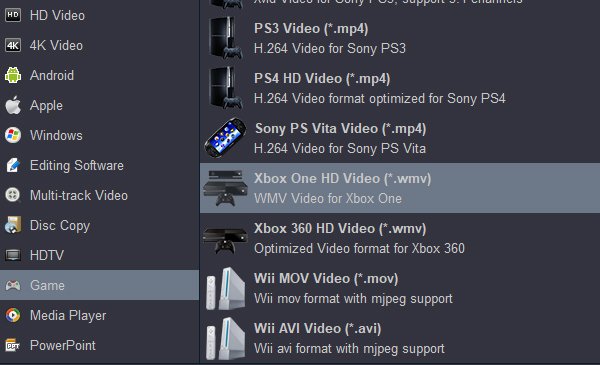 Acrok Video Converter Ultimate for Mac runs on a pretty high amount of system resources and quickly finishes an encoding job without causing us any difficulties along the way. The image and sound are maintained at a very good quality in the output files. I highly recommend this tool to all users.
Graham Carter

Thanks to this product, I use the ultimate converter to convert videos and audios in various formats, and the result is quite good.
Olivier Cant