Can we play movies on Nintendo Switch?

Why doesn't the switch play local movies of the SD card?
I'm past that. But why can't I downloaded watch tv shows and movies I have saved on my SD card? All that's needed is a stripped down media player and there's already the default photos app that could have that capability! This would allow the switch to be such a great all in one travel entertainment device. Am I the only one who thinks this? - Dylan Jensen

Can Nintendo Switch play 4K MP4 movies?
I have some 4K video files I'd like to watch that my Switch, but I can't open it on my Switch, why? How to solve this problem? - Dan Winton

Nintendo's Wii U and 3DS both come with the Netflix app that allows users to stream TV shows and movies. With the Nintendo Switch, that same functionality isn't initially available. Can we play downloaded MKV, MP4, MOV and AVI movies on Nintendo Switch? No default media player, web browser, and most media apps (Netflix) aren't supported by Nintendo Switch. So we can't play local video from the SD card directly. Each day brings its own road. We can use other ways to get our favorite movies on Nintendo Switch.

Tip: How to use the hidden web browser on Nintendo Switch?

H.264 MP4 is the best playback format for Nintendo Switch and other hot devices. No matter which of the following ways to watch the movie on the Nintendo Switch, you have to convert your downloaded MKV, MP4, AVI, MOV, WMV, H.265/HEVC movies or Blu-ray/DVD movies to H.264 MP4. Acrok Video Converter Ultimate (Windows | Mac) is highly recommended.

If you are an Android or Apple IOS device user, you may also need to play downloaded movies or Blu-ray/DVD on your device, such as Galaxy S21, iPhone 12 Pro Max, Galaxy Tab S7, Huawei P50 Pro, Oppo Finx X2 Pro, iPad Mini, iPad Pro, etc. Acrok Video Converter Ultimate can do the BD and video conversion for playing on your smartphone or tablet.

It's all that simple! Since you've the MKV, AVI, MOV, etc movies now, all you need to do is using the Plex Media Server to play your downloaded videos on Nintendo Switch. Just read the instructions below. Similarly, you can also play any movies on Nintendo following the operations we introduce in this post.

Step 1. Open the official website of Plex Media Server. Press the Download button to download it on your computer. Then install it properly according to the prompts from the software.

Step 2. Launch the Plex Media Server, import the videos you would like to stream following the screen wizard. 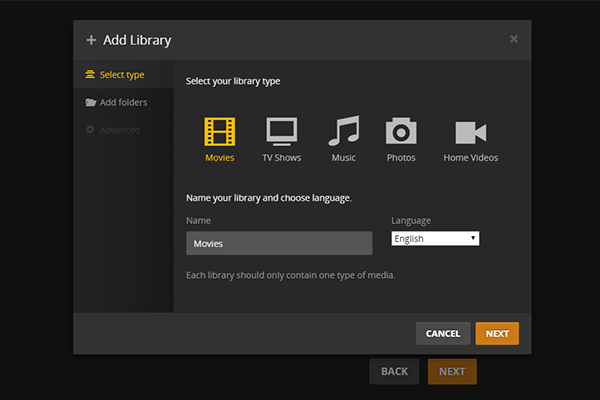 Step 3. Type the URL of your Plex in the address bar of Nintendo Switch's web browser, you will find the videos in Plex, then just click on the video you want to start playing.

2. Enjoy movies on Nintendo Switch, just in Japan
You Can Finally Watch Videos on Your Nintendo Switch... In Japan. The Nintendo Switch is finally getting an app which can play videos and media. Unfortunately, it's only available for users in Japan or for those who have a Japanese Switch account. The Switch's eshop just launched NicoNico, a Japanese YouTube-style video sharing platform which birthed a bunch of Japanese memes in the mid-2000s. It's the first media app on the Switch, though again, specific to Japan.

4. Play movies on with Nintendo Switch with Movies Anywhere

You can now watch purchased iTunes and other movies on Nintendo Switch with Movies Anywhere!
If you connect your iTunes/Microsoft/Vudu/Amazon prime account to a movies anywhere account and then also connect that to your Google Play/Youtube account, you can watch all your movies through the YouTube app!

1. Download the Movies Anywhere app on your smartphone and create an account
2. On the right, tap “more”, then tap “manage retailers”
3. Now simply link your Google Play and iTunes accounts (Vudu also available)
4. Go to the YouTube app on Nintendo Switch and sign into that same Google email
5. Click the folder icon and them “purchases”
6. You will now see all of your iTunes purchases available for streaming at no extra cost

This upgraded new Nintendo Switch (Probably in 2019), which was first reported by Dutch tech site LetsGoDigital, is rumoured to come with 8GB of RAM, 128GB of internal storage space and, amazingly, 4K video playback functionality. Right now the Nintendo Switch can only handle Full HD resolutions over HDMI in TV mode, and HD resolutions when in handheld mode, so the ability to play 4K video content, if not games at 4K, would be a major improvement and a feather in the new Nintendo Switch 2's cap. And especially so as there has been talk that the new console's screen will also be a brighter and thinner OLED panel.

How to convert any video for playing on Nintendo Switch?

Click "Covnert" button to start the video conversion. When the conversion is done, You need to click "Open" button to locate the converted movies. Use the method described above, you'll play any moveis on Nintendo Switch freely now.

It was a no-brainer that we would see a homebrew video player for the Switch since Nintendo does not allow it to play videos. The only service that plays video on the Switch is Hulu but you always need an internet connection for that. That's where the homebrew community comes in, to make it do what Nintendo doesn't.

This Video player called PlayerNX is in its early stages and don't get it confused with NXplayer. Now not everything going to work like it should as there's no audio and the FPS can get kind of slow but for being a POC release it's a really good start. The supported video formats are MP4, AVI, FLV, MKV, WMV, 3GP, and WEBM. You can pause/resume, stop playback, and fast forward too. To use it just place all videos in a new folder called media on the root of the micro sd card.