With the innovation of technology, smart tv screens are getting bigger and bigger, just like LG C9 65 inch Class 4K Smart OLED TV, Samsung 85" Class Q900 QLED Smart 8K UHD TV, Sony Z9G MASTER Series smart tv, Panasonic LED TV TC-65FX800W TV, etc. Mobile phones have become an indispensable mobile device in our lives. However, many people I like to watch downloaded movies and Blu-ray movies on their digital device for it's advantage of being easy to carry. Because of the development of smart phones, we can enjoy a richer digital life at anytime and anywhere. More people choose to enjoy their favorite movies with tv's bigger screen at home.

Can I watch Blu-ray movies on Windows 10 with Windows Media Player?
"Video-streaming services are all the rage, I have pretty hefty Blu-ray collections. Unfortunately, I pop a Blu-ray into your Windows 10 computer, I bump into trouble because Windows 10 Media Player doesn't support regular Blu-rays. So how can you play my favorite discs in Windows 10? - Clark, Frank

How to Rip Blu-ray Movies to Xperia 1?
"I received my friend's gift lately - three Blu-ray discs, it's great to play it on my computer with Blu-ray player, but I want to watch on my Xperia 1 so I can watch anytime. Besides, I also want to share this Blu-ray movies with my friends, I want to know how to rip Blu-ray to H.265 for playable on Xperia 1? Thanks for help!" – Matthew Hamer.

Blu-ray or Blu-ray Disc (BD) is a digital optical disc data storage format. It was designed to supersede the DVD format, and is capable of storing several hours of video in high-definition and ultra high-definition resolution. Commercial pre-recorded Blu-ray discs are typically protected with some form of copy protection. So we can't back up or convert Blu-ray movies to other format directly. With the help of third-party software, you can achieve your goal.

H.265, also known as High Efficiency Video Coding (HEVC), is the successor standard to H.264/AVC. H.265/HEVC has about two times compression ratio while retain the same video quality, which means HEVC has much better video quality than H.264 at the same bit rate. It is w widely y used in 4K videos and Ultra High Definition Television (UHDTV). It even supports 8K UHD (4320p, 8192×4320).

Although H.265 is the best format for video experiences, most players and portable devices are compatible with this video codec, such as Windows Media Player, QuickTime, iPhone XS Max, Google Pixel 3a XL, OnePlus 7, Galaxy S10, Samsung, Sony, Vizio, Philips, Sharp, Panasonic and LG's latest TVs, etc. This tutorial is intended to provide the best solution for those who wish to play Blu-ray movies anywhere without any restrictions. At the same time, encoding the Blu-ray fies to H.265 is also easy.

Tip: A Blu-ray disc can hold a lot of content. If you want to back up Blu-ray movies to your computer or mobile hard disk, it is better to convert the video file into H.265 encoding format, so that you can not only keep the original quality, but also reduce the storage space occupied by the file.

Here the detailed way to convert Blu-ray movies to H.265 video on Windows (Windows 10) is showed. The way to rip Blu-ray to H.265 in Mac OS X is the same. Just make sure you've downloaded the right version.

Install and run Acrok Video Converter Ultimate as the best Blu-ray Ripper on your PC. Insert a Blu-ray into your computer’s BD-ROM. Then find “Load Disc” icon at the top left corner, click it to loads Blu-ray files. You can load Blu-ray ISO, Blu-ray folder, DVD and other videos into Acrok software too. 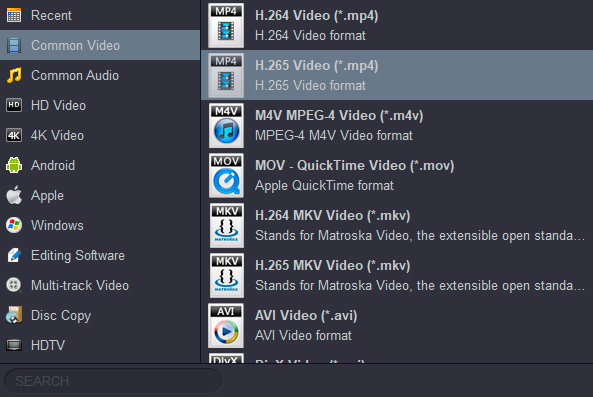 Tip: You can also adjust video/audio parameters by click "Setting" button as your need.

Simply click "Convert" button and the conversion will then begin. Wait until it's done, the speed of completion always depends on how big or how many your files are. When the conversion is done, please click "Open" button to locate the converted H.265 movies.

It's so amazing. I can use this Blu-ray to H.265 Ripper to convert other formats for my 4K TV. I can play all my movies on it now.
Roberts, Mark