Apple has announced the iPad Pro, a new tablet that comes in 12.9-inch. The 12.9-inch screen boasts a 2,732x2,048-pixel resolution Retina display and it's big enough for comfortably viewing two apps side-by-side. This resolution is enough to play HD movies. The iPad Pro features the A12Z chip with 64-bit architecture, which is 1.5 times faster than the A11 chip. This tablet is the best tablet so far.

After months of leaks, the new iPad Pro 2021 is here and there are some big upgrades, including that for the first time the iPad Pro doesn’t have an A series chipset. The iPad Pro 2021 also uses the M1 chip’s image processing to deliver improved clarity in low light.

The second half of the year is the peak of the new movie, Impossible - Rogue Nation, Pirates of the Caribbean, Fantastic Four, Kung Fu Panda, Avatar, Star Wars, etc. If you are Apple fan and got a iPad Pro 11 or iPad Pro 12.9 recently, this guide will help you watch these Blu-ray movies on your iPad Pro. It would be much enjoyable to play Blu-ray movies on Apple new iPad Pro. However, you can't directly watch Blu-ray movies on it since iPad Pro has no Blu-ray optical drive, but it has limited support for some digital file formats. Therefore, the possibility of watching Blu-ray movies on iPad Pro is make a ripping process.

Simple way to get Blu-ray movies on iPad Pro

The large screen of iPad Pro 12.9 makes it a wonderful tool for playing high definition videos, so you may often use it to play various videos like MP4, MOV and M4V. But have you thought of using your iPad Pro to play Blu-ray movies? It seems impossible because iPad Pro doesn’t have an optical drive and cannot be connected to a Blu-ray player, but you are able to play your favorite Blu-ray movies on it if you choose to convert the Blu-rays to iPad Pro 12.9/11 compatible video formats.

Acrok Video Converter Ultimate is the gold award Blu-ray Ripper application, it not only enables you to rip Blu-ray to iPad Pro and its predecessor iPad Air or iPad Mini playable file formats including, but also comes with a profile settings window to adjust technical aspects of your video such as resolution, aspect ratio, frame rate and more before you rip them.

How to rip and transfer Blu-ray movies to iPad Pro?

Here the detailed way to convert Blu-ray movies to iPad Pro video on Windows is showed. The way to rip Blu-ray for iPad Pro in Mac OS X is the same. Just make sure you've downloaded the right version. Read on for the detailed conversion steps.

Run the Blu-ray to iPad Pro Converter, insert Blu-ray into your computer's Blu-ray optical drive, and from the "Load Disc" drop-down menu, select "Load from disc" to import Blu-ray movies. 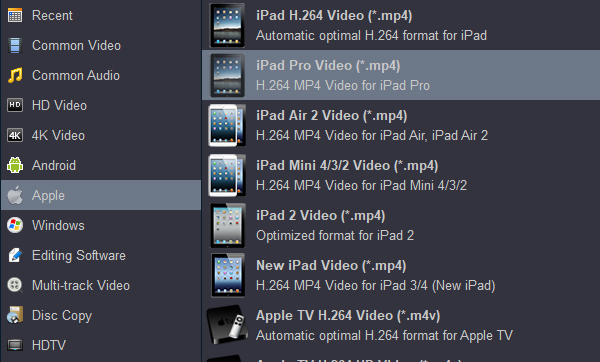 Step 1. Launch iTunes on your PC or Mac.

If you do not have iTunes installed on your PC or Mac, you may download it for free from Apple’s Official Website.

You can simply drag and drop your movies from computer to iTunes library. Then the added videos will be listed under the Movies library in iTunes. 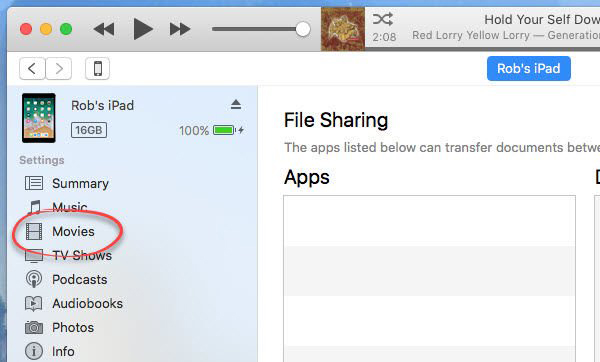 Step 3. Connect your iPad Pro with your computer.

Connect your iPad Pro to computer using the USB data cord. iTunes will then automatically detect the iPad Pro connection. Select iPad Pro in DEVICES section of iTunes device list. You will see a number of tabs across the top, including “Music”, “Movies”, “TV Shows” and other tabs.

Click the Movies tab, then check the box before to “Sync Movies”, you can select individual movies from your library. Check the box besides to the name of the movie you want to sync to iPad Pro.

It's so amazing. I can use this iPad Pro Blu-ray Ripper to convert other formats for iPad Pro. I can play all my movies on it now.
Cam Williams