How to play Blu-ray movies on PlayStation 5?

PlayStation 4K Blu-ray Solution: Wan to play Blu-ray movies on PS5 without Internet? Please rip and convert Blu-ray to PlayStation 5 supported formats before copy them to USB drive or stream via Plex Media Server. Acrok Video Converter Ultimate is your best choice to do this job. - Acrok Studio

PlayStation is a gaming brand that consists of four home video game consoles, as well as a media center, a line of controllers, an online service, two handhelds and a phone, as well as multiple magazines. Sony's next-generation PlayStation console is the PS5 (PlayStation 5) and it's landing at the end of 2020 – after a long and incredible decade that quite clearly put Sony at the top of the home console wars. The PlayStation 5 is the first game console able to process gameplay at 8K resolution with high-dynamic range, thanks to a better graphics card and other hardware improvements. The next console generation will be here soon. Sony's PlayStation 5 will face off against a new Xbox that's expected to be detailed at E3 2020 and rumored Nintendo Switch variations that will add more power or more portability, your preference.

Like the previous PlayStation (PS4, PS4 Pro, PS5), you will be able to play videos, photos and music stored on USB storage devices and media servers with the Media Player app provided by the game console. Many people are still having problems when playing 4K Blu-ray files on PS5. Last time, we share our readers useful tips on PlayStation supported video/audio format. And here, we'd like to focus on how to covnert Blu-ray to PlayStation 5 and more important things. PlayStation is one of the giant game consoles greatly favored by game lovers. But actually, even if you are not so big into gaming, it also might have something to appeal to you. After all, it has excellent multimedia features like 4K movie playback, Blu-ray playback, network feature, etc.

We can play Blu-ray disc on PS5 directly. Insert your Blu-ray disc into disc tray on PS5, the disc icon will be brought forward automatically. Select it and hit play button. You're now able to play the Blu-ray movies.

PS5 can be a player that handles Blu-ray movies, but for continuous playback of copyright-protected Blu-ray discs, you will have to connect your PS5 system to the Internet to make the encryption key for AACS renewed. So is it possible to watch Blu-ray movies on PS5 without Internect connection? That's where Blu-ray to PlayStation Converter comes in. If you pan to enjoy Blu-ray ISO or Blu-ray folder on PlayStation 5, you have to convert these files to PS5 playable format then watch the movies on PS5 from USB port. Of course, you can backup, rip and convert Blu-ray Discs on PC easily.

You can use Acrok Video Converter Ultimate / For Mac to convert your Blu-ray movies to videos playable on your PS5, PS4 and PS4 Pro. This tutorial will tell you how to do this conversion professionally and easily with a few steps.

How to rip and convert Blu-ray to PlayStation 5 supporte formats?

Here the detailed way to convert Blu-ray files to play on PS5 in Windows (Windows 10) is introduced. The method to convert Blu-ray video to PS5 playable format on Mac is the same. You just need to make sure you've downloaded the right version.

Run Acrok Video Converter Ultimate as the top Blu-ray to PlayStation 5 Converter on your PC. Insert the Blu-ray disc you want to convert into the optical drive of or connected to your PC. Click "Load Disc" to load in the digital Blu-ray file. A couple of seconds later you will see all the movie titles are in with the longest on selected by default. You can also choose other titles to convert. The first and end chapters of a highlighted title can be changed, so do the audio tracks and subtitles. You can preview all these settings by clicking the Preview button before a highlighted title.

Click the Format bar on the left panel then a profile library will pop up. Navigate to "Game", to select the "PS4 HD Video(*.mp4)" profile you prefer. 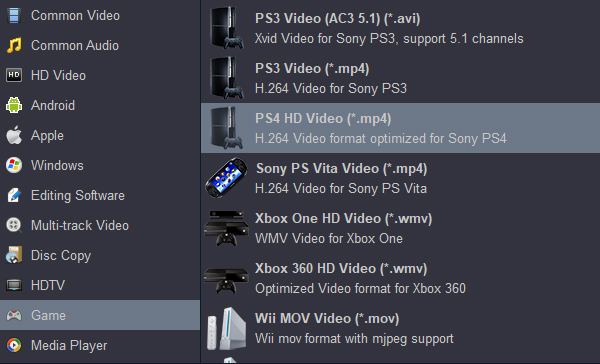 Click "Settings" button to open a corresponding window where you can change all default parameters of the video and the audio.

Click "Edit" icon then you can open a Video Edit window where you can change the aspect ratio and volume of the video, trim and crop the video, add watermark to the video, load external subtitles, etc.

If all settings are OK, go ahead to press the "Convert" button on the Blu-ray to PS5 Converter main interface to start the conversion. You can view detailed progress info and set your PC to auto shut down, exit the program, or hibernate when the task is done.

When the conversion is completed, click "Open" button to pop out the folder with converted files, thenyou can easily transfer and play converted files on PS5, PS4 Pro or PS4 via an external USB drive or stream files to your PlayStation via Plex Media Server. From now on, enjoy movie night with your family!

Truly All-in-one! Never thought such a great software would be available at such a low cost. It's the Ultimate software for video and my Blu-ray, DVD discs conversion and it's an intuitive, attractive interface.
Carl Gregory