MXF Not Supported in After Effects? Let's Fix It Now

Problems about can't play/edit MXF in After Effects

"My studio took some 4K MXF videos with the Sony PXW-FX9, but my After Effects only read the audio, why? How to directly import the MXF files to After Effects for smoothly editing?"

"So, I wanted to work with a file in MXF, but it needs some editing, I saw some tutorials that teached me how to enable experimental MXF support via After Effects online. Did these and still can't work with MXF files. I saw some people had the same problem but no solution."

"I can't play the 4K MXF recordings in After Effects. Any ideas on how to use .mxf from my Canon XF705 with After Effects? Also, I don't see a setting in the menu when I'm starting a project?"

"When I try to import a file into After Effect 17.5 it says the error could not be determined, it is an .mxf file if that matter"

Why After Effects Can't Play/Edit Well with MXF Files?

Many people use the MXF format extensively. MXF is an industry-standard file format for video and audio. Like QuickTime files, MXF files contain information about the media inside. The file extension of MXF file is ".mxf". So, you can also call an MXF file as .mxf file. However, many Adobe users are getting trouble when they try to import Sony XDCAM, Panasonic P2, Canon XF, ARRI Alexa In-Camera and RED MXF footage to After Effects, the file import failure window will pop up an error message "the error could not be determined" or you can import audio only with no video.

Recently many users have encountered problems when they try to import the videos recorded by their cameras/camcorders to After Effects, they ask why and want to find a solution. Luckily enough, After Effects CC (15.0.1) and above version add an that can be used to natively import MXF files directly into the timeline. Despite of this, many users are still MXF file import failure in After Effects (even the After Effects 22), let alone those who are using After Effect CC (14.0) or lower version. Well, the playback problem is mostly caused by MXF video file format not being supported by the editing software. Apparently, to import MXF file to After Effects for editing on Mac/Windows, you may get into trouble. The MXF format is not compatible with the Adobe video editing applications. How to edit MXF files in After Effects? To get the answer, please keep reading the next section with attention.

Simple Fixe for MXF Not Supported in After Effects

- Transcode MXF to a native format editing in After Effects

In fact, till now, MXF hasn't been added to the official native supported format lists of After Effects. MXFs are a particularly flexible form of container file. They can contain multiple video streams, multiple audio streams, multiple subtitle files and a whole host of other things. Because of this, they're quite hard to work with. Most video software doesn't support them at all and After Effects only has an experimental MXF handler. Accordingly After Effects can open some MXF files and not others.

MXF files aren't really a file type that anyone should be using for editing. In short - don't try to edit MXF files in After Effects. They are not well-supported and you often end up with unexpected errors like you have.

So what can you do? To use MXF files in After Effects, the most efficient and easiest solution is to convert the MXF file to After Effects edit-friendly codec/format. And transcoding is also an 100% working solution.

If your XAVC, XAVC-I, XF-HEVC, XF-AVC, DNxHD MXF file can play fine but can't be imported to After Effects, then file import failure should be due to incompatible file format or codec missing instead of file corruption. It means your After Effects doesn't support the video and audio codecs in your MXF video. In such situation, you may have to transcode MXF to an editing-friendly format that After Effects supports. Which one can do this job easily? Acrok Video Converter Ultimate (For Windows | For Mac) is your best choice.

Free download the best MXF to After Effects Converter

How To Convert MXF To After Effects Supported Format?

Install and run Acrok Video Converter Ultimate as the top MXF to After Effects Converter, and click "Add file" button to browse and open target MXF file. Alternatively, you can simply drag and drop the source MXF file into this converter. Batch conversion is supported so you can load multiple videos to convert at the same time. 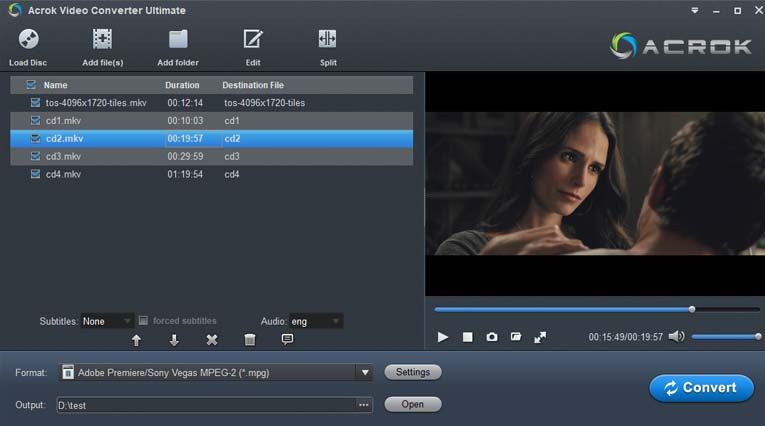 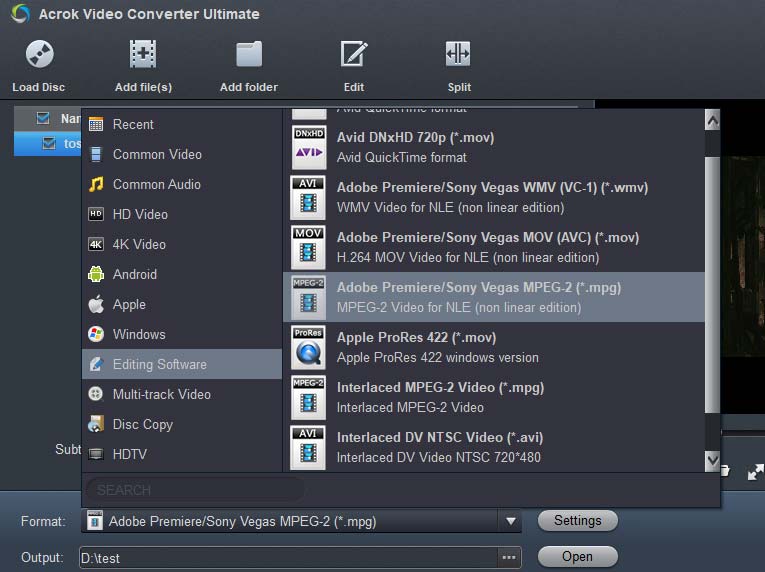 If you want to change the output video's parameters like Encoder, Resolution, Frame Rate, Video Bit rate, Aspect Ratio, you can click the "Settings" icon. If you don't want to do so, you can just let them "Keep Original". 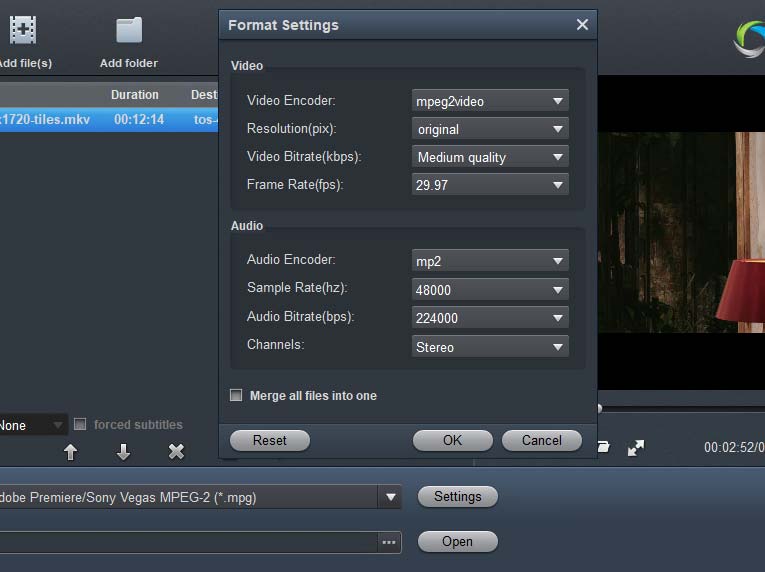 You can trim, crop, rotate to make some easy video edits in a linear manner with Acrok MXF to After Effects Converter. If you like, you can add 3D effects onto the loaded MXF files. By triming the loaded MXF video, you can save more conversion time. 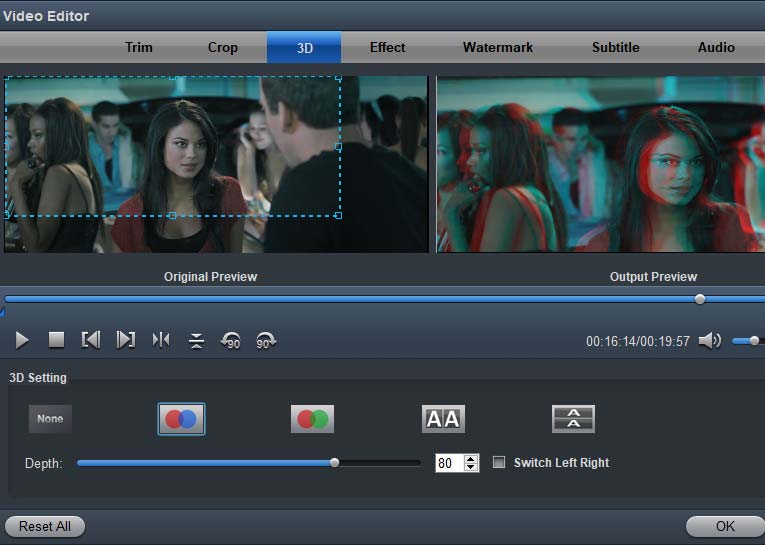 Start converting MXF for After Effects

Choose a easy-to-access destination to store the resulting files. You can do this by clicking "Output" bar beneath "Settings". Click "Convert" icon on the bottom right corner and let the program takes care of it. If you don't want other applications to draw more processing power away from what you are doing, then you can shut them down to expedite the MXF to After Effects conversion. That's it!

When the MXF to After Effects supported format covnersion is done, please click "Open" button to get the converted video files. Launch the After Effects , click Add Video button to import your video, or drag and drop the video to the program.

MXF is very much an end user format. Many cameras/camcorders outputs MXF files, no editing software uses it as a native editing format, so there's no good reason for any editing software to ever be able to open an MXF file. I was surprised when After Effects started to introduce MXF support in After Effects CC 15.0.1, but there it is. It's buggy and incomplete and I wouldn't recommend ever relying on it. When you get MXF file import failure error in After Effects, you can transcode MXF to fix it.

This as a great piece of software easy to use with great results. I will recommend Acrok video converter ultimate to all my friends.
Graves, Michael

I use it to convert videos and audios in various formats, and the result is quite good. Acrok allows me to edit videos before converting, it is so powerful. I like it.
Raufmann, Barbra