How to Play MP4 Files on Hisense Android TVs in 2022

About MP4: MP4 is a free standard container video format, which can hold a wide range of video, audio, and subtitle tracks in one single file. This file format is similar to other container formats like AVI, MKV, and MOV when storing multimedia like video and audio. But what importantly makes it different from other files is that it is entirely open when it comes to the specification. MP4 is short for "MPEG-4 Part 14," and is a container format that can store video, audio, subtitle, and image data in separate tracks. Each track, or data stream, may be encoded with different codecs. May be encoded in various codecs, such as MPEG-4 Part 10 (H.264/AVC), XAVC HS, XAVC S, MPEG-H Part 2 (H.265/HEVC), and MPEG-4 Part 2. We can download MP4 videos/movies from websites, record 8K/6K/4K MP4 footage with camera, camcorder and smartphone. Usually, your Android TV can't recognize or play your MP4 video smoothly because the format is incompatible.

1. I have just bought a new Hisense Android TV with model number - 65U7G. I am unable to play the recorded XAVC S MP4 file through USB. While trying, the Android TV gets hanged, and then I have to restart the Hisense TV by powering it off and on.

2. I have just recently bought a new Android TV, the 65U8G. All went well until I loaded a few MP4 (4K H.265 encoded) files onto a USB drive and found that the TV didn't list them.

3. I have bought a brand new Hisense Android Smart TV U6G Series 65U6G model. The problem is that it does not recognize the MP4 video files. I can play WMV and AVI formats, but not 4K MP4 videos.

If you are still meeting the above-listed issues, you can try to resolve them by directly converting MP4 to Hisense Android TV compatible format and have a try.

Part 2. Guide on How to Convert MP4 to Hisense Android TV

MP4 is a popular format these days that allows enjoying high-quality videos over various devices, including Smart TVs. If you have a Hisense U9/U8/U7/U6 Series Android TV, you would surely want to enjoy your favorite videos on it. Though the official site of Hisense Android TV claims that it supports MP4 format, many times, when you play these files, you will encounter playback issues. MP4 files may contain different audio codecs. Whenever it contains a codec that is not compatible with Hisense Android TV, the MP4 file may encounter a problem while playing on Hisense Android TV.

In situations when your MP4 does not play on Hisense Android TV, converting them to the compatible format is an ideal solution, and a video converter is needed. One such professional and feature-packed converter is Acrok Video Converter Ultimate. This smart program allows converting MP4 to the format that has all the codecs compatible with Hisense Android TV. Format conversion using the software is simple, easy, and fast.

Step by step instructions to convert and play MP4 to Hisense Android TV:

Launch MP4 to Android TV Converter and add MP4 files that need to play on Hisense Android TV. You can add files by dragging and dropping or by clicking the Add Files button. Multiple files can be added here.

Select Hisense Android TV compatible format as output. On the bottom, click the below-arrow beside the Format to open the drop-down menu. Select the HDTV 1080P Video (*.mp4) from the HDTV category. 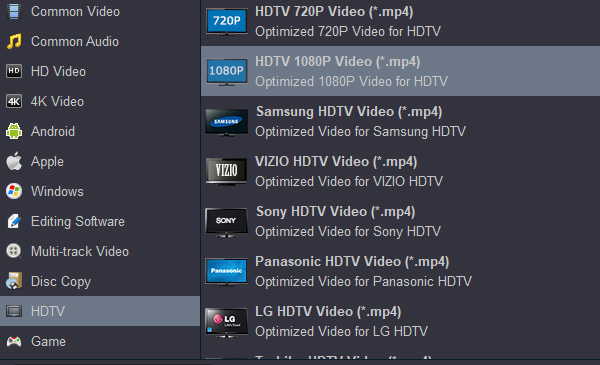 Part 3. How to play movies on Hisense Android TV from USB

Please note that Hisense will not assume any responsibility for any lost data and cannot guarantee perfect compatibility with all mass storage devices. Be sure to insert the USB flash drive into the USB 2.0 port. Data Input from USB Memory Stick only. Do not connect any device to this terminal such as digital camera, keyboard, mouse, etc.

With the above successful steps, your media will be played on Hisense Android TV.

Can't play MP4 on Hisense Android TV? So whenever you get stuck in such a situation, read above to get a solution to all your queries. And FREE DOWNLOAD Acrok Video Converter Ultimate to help you play and convert videos easily.

Acrok Video Converter Ultimate runs on a pretty high amount of system resources and quickly finishes an encoding job without causing us any difficulties along the way.
Leaver, Robert

I have downloaded the updated version per the instructions. All seems to be working fine now. I can rip my rented Blu-ray discs to MP4 via Acrok Video Converter Ultimate.
Owen Malone