How to watch Blu-ray/DVD on Chromebook?

"I'm hoping this isn't another featureless issue. I have an extensive Blu-ray/DVD collection and would like to watch a movie on my Samsung Chromebook. Is this possible or am I asking too much of this machine"? 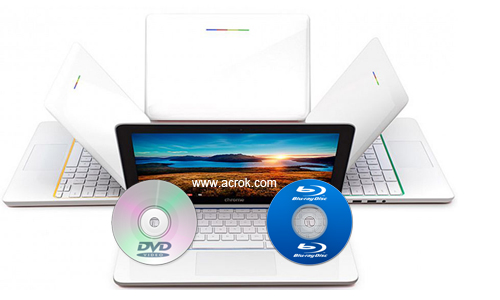 Chromebooks are light, inexpensive notebooks built for online computing. These small laptops have just 16GB of internal storage and connect to the Google Drive, where you can store your videos, music and pictures.Whether it's because of their very affordable prices or an aversion to Windows 8's complexity, more and more shoppers are buying Chromebooks.

Acrok Video Converter Ultimate is the best Blu-ray converting software so far, you can rip and convert Blu-ray/DVD to any video format. You can play the ripped/converted BD video on Smart TV, Windows/Android tablet, etc. For transferring and watching Blu-ray/DVD movies on Chromebook, you can convert/rip BD to H.264 MP4 with this best Blu-ray Ripper. In addition, you can convert MKV, AVI, MTS, MXF video to Chromebook supported video format. If you are Mac user, you can free download Acrok Video Converter Ultimate for Mac.

How to rip and convert Blu-ray/DVD to MP4 for Chromebook?

Insert Blu-ray/DVD dice into DB room. Run Blu-ray/DVD to Chromebook Converter, click "Load Disc" icon to import BD files. Freely select the subtitles for you Blu-ray/DVD movies from the "Subtitles" option. Thus, you can watch Blu-ray movie on Chromebook or other devices with Subtitle.

After the conversion, you can get the Blu-ray rips from the output folder effortlessly. Now,connect Chromebook to your PC and then transfer Blu-ray movies to Chromebook. Later, you can watch Blu-ray and DVD movies with the forced subtitles at ease.

Tip: If you plan to play MKV, AVI, MTS, MXF, FLV, RMVB, WMV movies on Chromebook, you can convert these video formats to MP4 via this powerful Chromebook Video Converter.

I love it! I just want to be able to convert my own library of DVD/Blu-ray keeping some of the languages and subtitles. Acrok Video Covnerter Ultimate can do this job. Thanks.
George