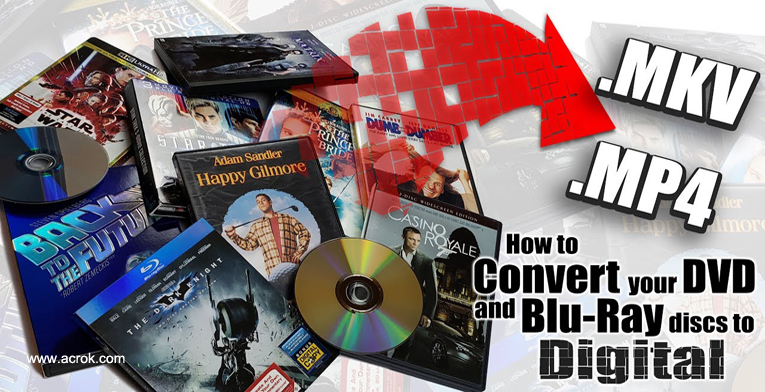 If you want to back up your Blu-ray disc to prevent the loss, scratch or break issue of your precious Blu-ray disc collection, or want to watch Blu-ray on multiple devices, convert Blu-ray to digital will be a great solution. Convert Blu-ray to digital can let you enjoy Blu-ray collection without carrying the physical Blu-ray player, also provide a long time safe storage of your valuable Blu-rays.

Best Solution: Use a Blu-ray to Digital Converter to Convert Blu-ray Disc

Since we have mentioned the reasons why convert Blu-ray to digital is important, we recommend you a real time-saver - Acrok Video Converter Ultimate (For Windows | For Mac). This program is professional, clean, easy-to-use and 10X faster than similar software.

Acrok Video Converter Ultimate enables you to convert 4K and 1080P Blu-ray disc to various digital video formats including MP4, M4V, MKV, MOV, 3GP, AVI, WMV and more, for almost all existing devices such as iPhone 12 Pro Max, iPad Air, Galaxy Note 20, OnePlus 9 Pro, PlayStation 5, Xbox Series X, Apple TV 4K, Smart TV, etc. If you want to edit your converted Blu-ray, you can also find this function in this program. With lots of outstanding features, you will like it at your first try.

How to covnert Blu-ray to digital formats?

The using steps are so simple and easy. The following guide illustration is only three steps, which will cost you less than three minutes to read. This guide uses Blu-ray Ripper for Windows (Including Windows 10) screenshots. The way to rip Blu-ray disc on macOS Big Sur and ablove is almost the same. Just make sure you've downloaded the right version.

Download the Blu-ray to digital converter free trial version and install it on your computer. When you open it, a blue, clean and clear interface will show up to you. Click "Load Disc" to import your Blu-ray (which is already being inserted to the computer Blu-ray drive). You can also add Blu-ray folder to rip.

Click "Format" to choose an output video format to convert Blu-ray. From the output format list, you can find various output formats. This is a quick way to help you select. MP4 and MOV are both quite suitable for converting Blu-ray to digital.

Click the "Convert" button and the program will rip Blu-ray to digital immediately. You can check the ripping progress and conversion time on the window. Once done, open your converted Blu-ray digital movie and enjoy it. The converted Blu-ray videos may surprise you that they hardly ever lose of quality.