Do you want to play Blu-ray movies (Disc, ISO, Folder) at any time on almost all of your devices, without storing the Blu-ray movies on every device that you want to enjoy? Well, Plex is one of the best streaming services to help you do this. You can rip Blu-ray for Plex then store your Blu-ray movie on a computer or NAS server. Then every device that installs Plex Player can play your Blu-ray after login your personal account. Here we will guide you on how to convert Blu-ray for Plex and play "like a Blu-ray" with Blu-ray to Plex Converter.

3. How to Make the Blu-ray Videos Look Like "A Real Blu-ray" in Plex

Can I play 4K Blu-ray files on Plex Media Server? Plex can't read Blu-ray file structure (BDMV and Certificate), so the only way to enjoy Blu-ray movies on Plex is to rip Blu-ray to a regular video format that Plex supported. Finding a Blu-ray to Plex Converter is not as easy as you think. At this time, some people would consider using MakeMKV to Rip Blu-ray. Unfortunately, you may also find that ripping Blu-ray by using MakeMKV is problematic itself. For instance, ripping Blu-rays with MakeMKV may break down in the process. As for HandBrake, please give him up decisively. HandBrake is a good video conversion software, but it is definitely not an expert with the ability to crack commercial Blu-ray discs.

Then, a good Blu-ray ripping software - Acrok Video Converter Ultimate can help you avoid such problems. It can bypass the copyright protection and convert almost all your Blu-ray Disc, Blu-ray ISO and Blu-ray Folder to Plex supported format, so you can transfer them to the Plex Media Server for watching.

Acrok Blu-ray Ripper for Plex is widely recognized as the best Blu-ray to Plex Media Server converter so far. Assisted by the powerful program, you could rip Blu-ray files to Plex with a wide variety of video formats like MP4, MOV, AVI and so on. Unlike some other similar programs in the market, the most advanced feature of the software is its fast ripping speed. And the function of converting 4K Blu-ray could surely enable you to enjoy the latest Blu-ray movies on Plex. All in all, Acrok Blu-ray Ripper could make ripping 1080P/4K Blu-ray files no longer one time-consuming job.

Just download its free trial version and open the software directly. It opened up a whole new vision of the interface. And then follow the tutorial.

Here is the guide for you to convert and rip Blu-ray for Plex easily.

Just insert your Blu-ray disc to your computer hard drive. You may view several menus existing at the top bar of the main interface. Click the "Load Disc" button to import the Blu-ray files that you want to convert to Plex. Of course, you can click "Add file" or "Add Folder" to import Blu-ray ISO and Blu-ray Folder files. If you want to play other downloaded / recorded MKV, MTS, MXF files with Plex Media Server, this progtam can give you a hand too.

The loaded Blu-ray files with the information in detail could appear in the interface. Just click the "Format" bar, in order to pop up one window where you could choose Plex Media Server compatible video formats like MP4, MOV, AVI from the drop-down list.

Click the "Settings" button and customize proper video/audio parameters including Video size, bitrate and fame rate and mroe. Usually 1920*1080 video size and 30fps video frame rate are recommended for video playback. Well, if you prefer to work with orginal video resolution, you can select "Orginam" in Resolution (pix) coumn for more fun.

Begin to Rip Blu-ray for Plex

Check the Blu-ray playlists that you want to rip, then click the "Convert" button on the bottom right corner, and the conversion process for Blu-ray to Plex will start immediately.

After that, you could get a ripped Blu-ray movie file on the computer hard drive that you've selected before easily. Then you could stream Blu-ray movies to Plex Media Server.

This is usually being asked in the Plex Forum. We will guide you on how to install Plex and upload Blu-ray to Plex in detail. But before this, let's focus on how to rename your converted Blu-ray file before uploading to Plex, so it can act like a real Blu-ray in Plex.

Tips： After you rip Blu-ray to Plex with Acrok Blu-rayRipper and upload Blu-ray to Plex in a right way, the Blu-ray movie in Plex will look like this: it has selectable audio tracks and extras (Blu-ray playlists). 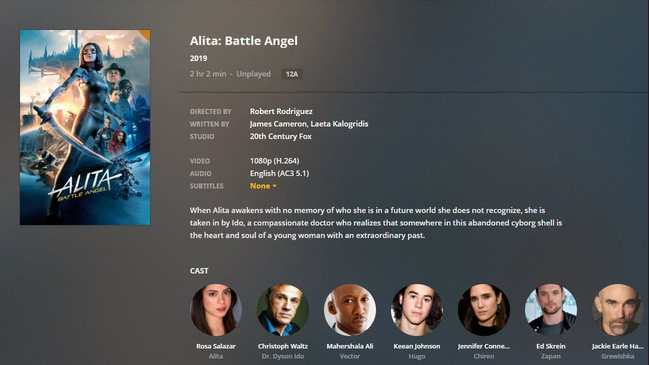 2. Name your main movie as same as the movie folder and name your extras Blu-ray playlists base on the extra type:

So, the ultimate folder structure can be like this:

Note: you should download from "Plex Media Server" but not "Apps&Devices". "App&Devices" is for installing Plex Player.

Step 3. Its main interface would appear on the web page. Click on "Movies-Edit-Add folders" to add Blu-ray to Plex.

Step 4. Click on "Browse For Media Folder" and choose the whole Blu-ray movies folder "/Movies" and then click the "Add LIBRARY" button. Wait a while, Plex will need some time to load the Blu-ray movie information from its database.

Now, you have finished the process of convert Blu-ray for Plex and upload the Blu-ray movie to Plex. Plex gives you the ability to access all your media files on TV, computer, phones no matter where you are. So, for example, if you have installed Plex Player on your Galaxy S22 Ultra, you can play Blu-ray with Plex directly without importing the Blu-ray to Galaxy S22 Ultra.

Tips： If you use your computer as Plex Media Server, the computer must be turned on while you watch a Blu-ray movie on other devices. Because of this, some people will install Plex Media Server on NAS. NAS was designed to run 7*24 hours uninterruptedly.

Lastly, let me take a minute to sum up the main points of the whole text. People try to convert Blu-ray to Plex Media Server since that they want to play Blu-ray files on various devices anytime and anywhere. Many people choose to use MakeMKV when they encounter the problem of ripping Blu-ray. Yet they're unable to rip Blu-ray with copy protected and particularly the newest Blu-rays by using MakeMKV. If using a software like Acrok Video Converter Ultimate which has the best price versus performance ratio could be economical with time and effort. What's your opinion?