How to convert Blu-ray to AVI on Mac/Windows?

People usually have demands to convert Blu-ray to AVI. Why? As we all know, Blu-ray has many limitations on streaming capability, portability or playback compatibilities. But AVI compression can make it more efficient.

AVI is a common video format in daily life. Although it is not as widely used as MP4, you will find that many electronic devices (tablet, smartphone, tv) and video players support this format. AVI, short for Audio Video Interleav, is a multimedia container format introduced by Microsoft in November 1992 as part of its Video for Windows technology. AVI files can contain both audio and video data in a file container that allows synchronous audio-with-video playback. Some people say that AVI is good, others say that AVI is bad. I don't want to elaborate. I list the advantages and disadvantages of this format below. For Reference Only.

High-quality audio fidelity
Does not need special hardware or software to run
Can be used to make playable DVDs
Supported by many codecs to achieve the desired AVI audio output format
Best for master files since it's good at maintaining its quality over time
Suitable for promos, short movies, and ads because of its familiar format and compression capabilities

Can be quite large compared to other file formats if uncompressed, forcing you to trade disk space with quality
Does not support user interactivity
Doesn't natively support incorporating soft subs
Compression beyond certain limits may lead to a decline in quality

AVI files are more compatible with many popular devices and media players and are more often used for broadcast TV systems. The file size can be significantly reduced, the resolution and bit rate of the Blu-ray video can be diverse after being converted to AVI format. So in order to extend the Blu-ray usage on most social websites, portable devices, and popular media players, the most adopted solution is to convert Blu-ray to AVI format.

Can VLC convert Blu-ray to AVI? To be exact, YES. Many people want to use VLC to copy and rip Blu-ray movies, I advise you to give up this idea, because this process is too complex for many people to successfully convert the Blu-ray into their desired format - AVI.

1. The Best Blu-ray to AVI Converter

2. How to rip Blu-ray to AVI on Mac/Windows

The Best Blu-ray to AVI Converter

To convert Blu-ray files to any standard of AVI file you need, Acrok Video Converter Ultimate, as one of the best Blu-ray to AVI converters, can become your good assistant.

Not only the expertise, Acrok Blu-ray to AVI Ripper is also a user-friendly software. With a super easy-to-use and clear interface, it provides you the most convenient and efficient work.

How to rip Blu-ray to AVI on Mac/Windows

Here we take ripping Blu-ray to AVI in Mac as an example. For Windows users, Acrok Video Converter Ultimate won't let you down. The way to do the conversion on Windows is the same. Just make sure you've got the right version and Blu-ray drive. Get it now and follow the detailed steps below to get all done fast.

Load Blu-ray Resource to the Program

After downloading and installing the Blu-ray to AVI conerter program, run it and insert Blu-ray into your Blu-ray drive. In the following main window. Click the "Load Disc" at the upper left corner of this program to load your Blu-ray from targeted drive. Generally, the Blu-ray films has a longer duration, making them easier to identify as opposed to other media files. You'll see the the name of Blu-ray movie with a lot of relevant information on the window. This may take up to a minute or two depending on the contents of the Blu-ray and the speed of your optical drive.

To convert Blu-ray files to AVI format on Mac, simply click "Format" to open the format list and select AVI from Comon Video tab as the output format. Acrok provides you with different output options. You can choose the one that suits you according to your needs. 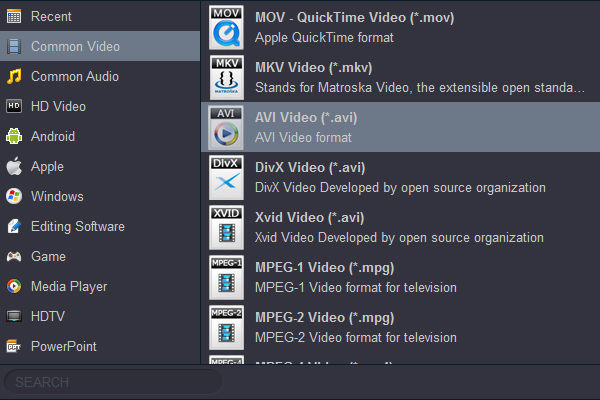 With this super Blu-ray to AVI converter, you can clip, crop, rotate, adjust effects, or add 3D/watermarks to make a movie of your style. This program provides the preview function, and you can take a snapshot to capture wonderful moment while previewing the movie.

You can click "Settings" icon to change the Resolution, Encoder, Bit rate and Frame rate of the AVI video and Sample Rate, Channels, Encoder and Bit Rate of the AVI Audio. Remember that the output file size mostly depends a lot on these settings.

Next, click on "Output" bar to specify a directory to store the converted AVI files. If you don't customize the output folder, this software will automatically save the files in the default folder.

Start to Convert Blu-ray to AVI

Finally, hit the "Convert" button on the lower right of the interface to let the Blu-ray to AVI converter do the rest for you. See, it is so easy to accomplish the process. After the conversion, you can transfer these AVI files to your devices for cozy enjoyment. That's it!

If you have trouble in converting Blu-ray to AVI format, let Acrok Blu-ray to AVI Converter help you out! It is a multi-functional program which will come in handy not only for Blu-ray to AVI conversion but also with many other file format issues with ease. Also, Acrok Video Converter Ultimate provides editing tools and enables you to enhance and customize any video file professionally. Now it's your turn to try!

Blu-ray may be majestic, but it also has more copy protection than any other format around, and playing it on your computer can be difficult to impossible. Acrok Video Converter Ultimate can rip my Blu-ray discs to any format easily. I can enjoy Blu-ray movies on my tablet and smartphone freely.
Stephen Haugh