Rip and convert Blu-ray to FLV on Windows and Mac

Though FLV video format is not as popular as before, sometimes we still need to convert videos to FLV format, such as uploading to YouTube. And, some people need to rip Blu-ray disc to FLV video format. If you try some free Blu-ray ripper, you will fail due to some performance problems.

But now, you can get the assistance of Acrok Video Converter Ultimate, which has the ability to convert any Blu-rays to FLV or any other common video formats if necessary.

FLV stands for "Flash Live Video". It is a format designed for web video playback that offers high rates of compression and produces high-quality video. Usually, Flash Video includes two different video file formats: FLV and F4V. The FLV is a binary file, which is composed of file header (FLV header) and a lot of tags (FLV tags). The tag can be divided into three categories: audio stream, video stream, and script flow. In addition, some FLV files are embedded in SWF files.

To be honest, get a stable program is important to finish the Blu-ray to FLV conversion. And Acrok Video Converter Ultimate is what you need. This program is specially designed to solve the problem of video conversion as well as Blu-ray ripping process. For the video conversion, it supports almost all the common audio/video formats. For the Blu-ray ripping, you can convert Blu-ray to any video or audio format you like including FLV. The most obvious advantage of Acrok Blu-ray ripping software is the 10X conversion speed which can save you a lot of time. With the support of NVIDIA CUDA, NEVENC, AMD and Intel HD GPU acceleration technology, you will experience the fastest speed to complete a process. Now follow the 1-2-3 steps, you will find the conversion from converting Blu-ray movie to FLV is so easy and fast. If you are Ma user, please free download ad try Acrok Video Converter Ultimate for Mac.

Features of Blu-ray to FLV Converter:

Tip: If you want to try some free Blu-ray to FLV ripper, you can read the best Free Blu-ray Ripper review to rip Blu-ray for Free.

Step by step guide to convert Blu-ray to FLV 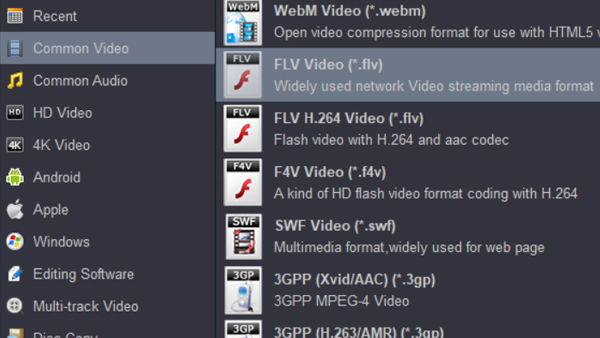 Click the Settings button, you can customize the video quality, video size, resolution and audio channel etc. If you want to make your video better, you can use the "Edit" and "Video Enhance" option to do some editing activities and optimization, etc.

After all the settings, click the "Convert" button to start converting your Blu-ray to FLV or MOV format. The pop-up window will show the progress of conversion. You just need to wait for the conversion to be done.

That's it! It is simple as 1-2-3. Now you know how to convert any Blu-ray movie to FLV with high quality and fast speed. So it must be time for starting your own conversion. Take a try with Acrok.