What are the video/audio formats supported by Google Pixel Phones?

Google has taken a more affordable approach to smartphone design this year. The Google Pixel 5 loses some of the more advanced features of its predecessor in order to keep the cost down, and the result is a streamlined phone with great camera software and a clean Android interface. The 6-inch Full HD Plus (2340 x 1080) display is a sharp and bright screen, with minimal bezels and a punch-hole to house the front-facing camera. The processor is paired with 8GB of RAM, and the Pixel 5 breezes through tasks from browsing the web to gaming and playing media.

The Google Pixel 6 will pack a custom Tensor chip and come in two versions: standard and Pro. The pro version has a 6.71 inches AMOLED (120Hz) screen, 12GB RAM, 5,000 mAh battery, etc. Are you ready to get one for playing games, surfing the internet, listening to music and watch downloaded movies on the Google smartphone as well? Due to compatibility problems, we can't play all mainstream video formats on the Google Pixel smartphone. So for playing all the MKV, MP4, MOV, AVI, WMV, VOB even Blu-ray and DVD movies on your Googe Pixel 6, Google Pixel 6 Pro and other Google smartphones, it is necessary for you to read the following conntents.

Market research firm IDC says smartphone sales fell 6.6 percent in the first quarter of 2020, the sixth consecutive quarter they've declined. But in order to gain more market share, every company has to develop new products to meet the needs of consumers. Google's new mobile phone came into being at the historic moment.

As you see here, Google smartphone only supports MP4, MP3, WAV and eAAC playback. How to play our downloaed movies and Blu-ray/DVD movies on Google Pixel 6/6 Pro/5a/4a? Don't worry about these. Acrok software can solve these problems.

Acrok Video Converter Ultimate (For Windows | For Mac) is a blazing-fast, intuitive all-in-one media toolkit which lets you rip, backup Blu-ray/DVDs and convert even edit videos in one place. With it, you can effortlessly achieve all your multimedia demands and enjoy video/DVD/Blu-ray anywhere and anytime you like. For Google Pixel Phone's users, this best format converter for Google Pixel 6, 6 Pro, 5a, 5, 4a, etc. Enable you to convert any video/audio to Googpe Pixel phones compatible formats like MP4, MP3 to playback on Google Pixel phones with no format restriction.

How to convert video and music to Google Pixel phones supported formats? 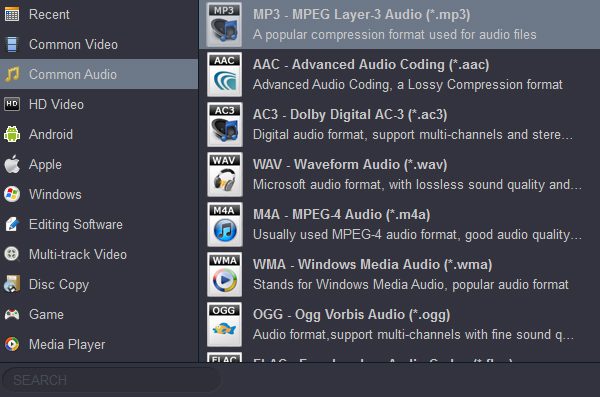 In the end, click the big "Convert" button to start converting the added videos audios to Google Pixel phones compatible files. When the conversion completes, click “Open” to locate the converted media files. After that, transfer them to your smartphone and enjoy them on the go freely.

Perfect HD video converter for Google Pixel. I can transfer and play MKV and Blu-ray movies on my Google Pixel freely. Thanks very much. This is the best and most powerful Google Pixel XL video converter I've found. It works well and will always make you pleased by providing some bonus features.
Stephen Stark