No Sound with MKV files on TV: Fix Inside

I have an Vizio D-Series 43 TV(D43fM-K04). I have files on an external usb hard drive. there is no audio with all .mkv files which have attached codec, when they are played using the default media player. However they are fine if played on my PC through VLC. I don't want to install any apps on my TV. I would like to get them working using the default media player. How do I fix the lag between video and audio? Can anyone suggest a solution?

MKV movies no sound on my Sony Bravia TV. I downloaded 12 4K MKV movies from intnet, but I can't enjoy these films freely. Some movies only show video without sound, and some have sound without image. Is there any possible explanation for why audio in a video file would only be detectable by one specific app? Would really appreciate any ideas or tips, thanks!

Have you ever downloaded your favorite movie from websites only to see a video but no audio on your TV? If your answer to this question is yes, then we got your back. We have researched and simplified for you the steps you need to follow in solving this issue.

How to play all the video formats on TV from USB? With the release of many 8K, 6K and 4K Smart TV, many brands revealed that the native media apps will now support .mkv. This is undoubtedly a good addition as nowadays .mkv files are quite often used for videos. But for some reason, even after this addition, users have reported they are unable to play sound in the .mkv files. In order to play all the MKV video on your TV without any problem, it is necessary that the system supports proper codecs to play the video. The main cause for this problem is that the DTS audio used in MKV files is not compatible with those used in default media player. How to automatically sync audio and video sources easily?

Use a third-party media application:

Many users hope to install new players to get out of trouble, which is barely a solution. But these software are not omnipotent, and there are also problems in compatibility. Even if you can successfully play MKV videos on TV today, you may not be able to play other formats tomorrow. There are also risks in installing these free software, which can easily drag down your TV. Unlike mobile phones or tablets, TVs are not free to install the plug-ins or software we want. Users can only install apps provided by their own malls. So are there any other solutions? The answer is yes.

The Best Way: Convert video file from .mkv to your TV supported format

I suppose you'd like to play MKV videos with the default video player app on your Smart TV or Android TV? I'd suggest converting them to an TV-friendly format to be playable on Samsung, Sony, Vizio, Panasonic, LG, Xiaomi, Sharp, TCL and Hisense TV by using use a third-party software. Performing a Google search can get a number of free & paid MKV video conversion tools, among them, Acrok Video Converter Ultimate for Windows is our preferred option. It takes care of the job in converting .mkv video into a format playable on your TV, and can convert anything at all to any other format. Additionally, the program allows you to edit the video the enhance the output result. If you're on a Mac, use its Mac version - Video Converter Ultimat for Mac to convert .mkv for TV playback.

How to convert MKV files for playing on your TV?

Launch the MKV to TV Converter and click "Add file" icon to load the MKV files that have no sound in TV.

Choose best video format for TV. As the videos loaded, click "Format" bar then an output profile window pops up, which allows you to convert MKV to 3000+ profiles. For example, move to HD Video > HD H.264 Video (*.mp4) > OK.

Of course, you can also choose the output options according to the TV brand. For example, you can choose HDTV > VIZIO HDTV Video (*.mp4). 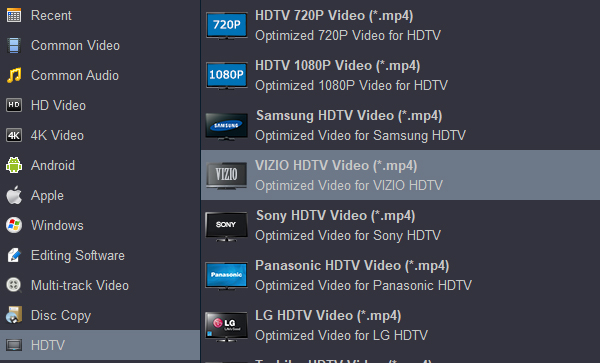 Click Output button to specify an output folder path if necessary. Then, tap "Convert" button to start converting MKV to MP4 in a very short time.

When the conversion is done, click "Open" button to locate the covnerted videos, copy these files and transfer them to your USB flash drive. After then, you can play MKV videos freely on TV without no sound issue.

I have had latest versions of Acrok Video Converter Ultimate, and so far this is the best. It's easy to use, fast and has a brilliant interface. Then there is the added bonus of a great support team.
- Ruedemann, Al

I find the interface of Acrok Video Converter Ultimate fairly intuitive which makes it's use easy for me and I will be using the files mostly for Blu-ray discs to ensure they will play on my Samsung Smart TV.
- Adams, James