I just set up my Apple TV 4K and was very surprised that when I played a 4K Blu-ray from my Macbook it came out all grey on the Apple TV 4K. This thread claims that you cannot play a 4K Blu-ray on Apple TV 4K due to copyright. Here are 3 ways to get around Apple's 4K Blu-ray viewing protection.

Can Apple TV 4K play 4K Blu-ray movies? Many people may wonder with a lot of 4K Blu-rays discs at hand. In recent years, streaming media via Airplay to Apple TV 4K to enjoy a big-screen movie watching has become an overwhelmingly welcome and pleasant lifestyle to iProduct users. However, the situation of playing 4K Blu-ray on Apple TV 4K fails in the wake of incurable format incompatibility. That's because 4K Blu-ray is stored in M2TS format, which is not in the supported list of Apple TV 4K.

Apple TV 4K only supports a few formats including H.264 and MPEG-4 types. In an effort to smoothly play 4K Blu-ray on Apple TV 4K, it's considered a practice to convert 4K Blu-ray to Apple TV 4K supported format. For example, MP4 is a nice choice. Which software is the best Mac Blu-ray Ripper for Apple TV 4K?

Here we advise you to use a third party software, Acrok Video Converter Ultimate for Mac. Among 300+ output formats, the machine even offers exclusive choices for Apple TV 4K that will save you much effort. Plus, this multifunctional allows users space to enrich the videos with further actions. Available versions are given for Windows and Mac with an admiring 10X ripping speed.

Step 3. Click "Convert", and in a few minutes the Blu-ray will be converted to Apple TV 4K best playback format. 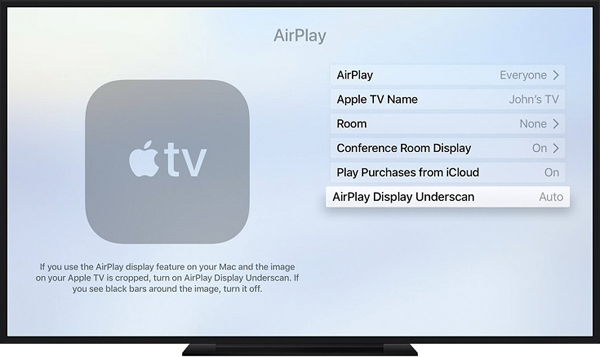 It's easy to rip 4K Blu-ray to Apple TV 4K supported format with Acrok 4K Blu-ray Ripper. Otherwise, there are other feasible methods to smoothly play 4K Blu-ray on Apple TV 4K. See more in the next part.

Method 2. How to Cast 4K Blu-ray to Apple TV with Airplay and Mac

An alternative way to play 4K Blu-ray discs on Apple TV 4K is to mirror the your 4K Blu-ray file to the TV. By now, Mac has upgraded to support Airplay Mirroring (while Windows users can take chance with Mirror360). Before any formal action with Airplay Mirroring, you've got to ensure the device has updated to the latest version.

You may find your MacBook lack built-in drive for a lighter design. It's quite easy. Just come to Apple's official website and you will find a series of Superdrive players on sale.

Tips: Deal with "The viewer could not be moved to selected screen"

All set, however, after inserting the 4K Blu-ray disc, you may be confused to see the error message reading "The viewer could not be moved to selected screen." Here you are in need of a final preparation, an Apple TV 4K supported player software, to arrive at playing 4K Blu-ray on Apple TV 4K. Please turn to the next part to finish it. 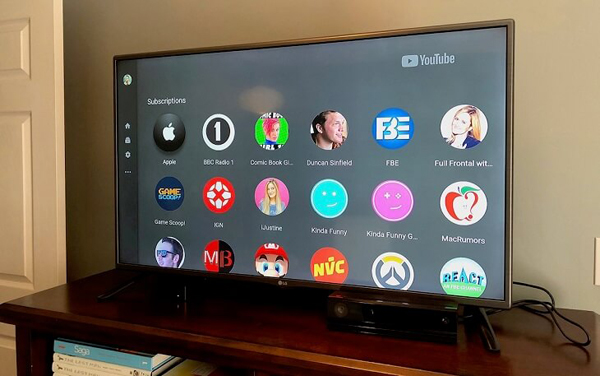 Step 1. Insert the 4K Blu-ray into the Superdrive.

Step 3. Then come to "System Preferences" > "Displays" to open Airplay.

The new Apple TV 4K is faster than competitors like the Roku Ultra, Streambar and Google Chromecast. Apple TV 4K runs tvOS and you have access to the App Store for thousands of streaming services, which historically have come to Apple TV before other platforms. Lastly, the Apple TV 4K makes sense as a player for those in the Apple ecosystem as photos, music and what you’re watching will sync across all your devices.

Physically identical to the 1080p Apple TV, the Apple TV 4K is a simple curved black box measuring 1.4 by 3.9 by 3.9 inches and weighing 15 ounces, with a single indicator LED on the front panel and a power connector, HDMI input, and Ethernet port around back. It's small, squat, and easy to position unobtrusively anywhere around your TV.

Select movies and shows on iTunes are available in 4K, with support for high dynamic range (HDR) TVs. This means, if you have an HDR-compatible TV, the 4K video you watch on the Apple TV over iTunes won't just feature 3,840 by 2,160 native resolution, but a wider range of light and color than standard video content. All iTunes-based video must be streamed to the Apple TV 4K; the onboard storage is reserved for apps.

This powerful utility can turn your Blu-rays into digital files for viewing on smartphones, tablets, and optical drive-less laptops. Acrok 4K Blu-ray Ripper does a very good job backing up and transcoding your 4K Blu-ray collection, including your copy-protected discs.
Mackey, Kyle