How to watch Blu-ray movies on Galaxy S20?

At the spring of this year the new Galaxy S20 series smartphones are released by Samsung. The Galaxy series smartphones are very popular on the market, until today Samsung has released so many powerful smartphones, such as Galaxy S20, Galaxy S10, Galaxy Note 10, etc. they are excellent Android smartphones on the market and have attracted a lot of fans. Have you bought a new Galaxy S20 smartphone to replace your old smartphone? The new Galaxy S20 has dynamic AMOLED screen, QHD+ screen, HDR and 120Hz features are also supported. What's more, it has the ISOCELL Bright HM1 camera, which can help you take high resolution photos. In terms of core configuration, Samsung Galaxy S20 series mobile phones will be equipped with Qualcomm 865 processor, LPDDR5 memory, UFS 3.0 flash memory, and will run Android 10 with the latest configuration. In terms of battery life, Samsung's Galaxy S20 series phones will be equipped with a 5000mAh super-large battery, which will ensure no worries about battery life, you can play Blu-ray on Galaxy S20 for longer time.

Nowadays more and more users want to transfer movies from Blu-ray to Galaxy S20 for watching on the go, because it is so convenient to enjoy movies, in this case, is there a way or tool that can help us to get rid of Blu-ray copy protection and then play Blu-ray on Galaxy S20? The answer is yes, here we would like to share the powerful software with you, it is called Acrok Video Converter Ultimate, this program can help you to remove copy protection from Blu-ray discs and convert Blu-ray movies to common video formats for Galaxy S20 and other devices, the converted movies will not have protection or limitation anymore.

Acrok Video Converter Ultimate is the most powerful Blu-ray ripper software on the market, it can help you to convert protected Blu-ray discs as well as unprotected HD videos. For discs, it can rip Blu-ray discs, Blu-ray ISO, Blu-ray folder, DVD disc, DVD ISO or DVD folder. For unprotected videos, it can convert nearly all the 4K UHD videos, such as convert 4K MP4 videos, 4K MOV videos, 4K MKV videos, 4K H.265 videos, etc. to any video formats you need. Now please free download and try it.

How to convert Blu-ray to Galaxy S20 supported video formats?

The below guide uses Acrok Video Converter Ultimate Windows screenshots. The way ripping Blu-ray files for Galaxy S20 on Mac is almost the same. Just make sure you get the right version.

Download Acrok Video Converter Ultimate Windows version or Mac version from the link on this page, after you get this Blu-ray to Galaxy S20 converter from our website, install this program on your computer, launch it you will see the best Blu-ray ripper's main interface, it is brief.

Please click format column to choose Galaxy S20 supported video formats for output, from Galaxy S20 official website you will know that MP4 format is well supported, so we recommend you to choose “Common Video -> H.264 MP4 Video (*.mp4), with this format you can play Blu-ray movies on Galaxy S20 smoothly. 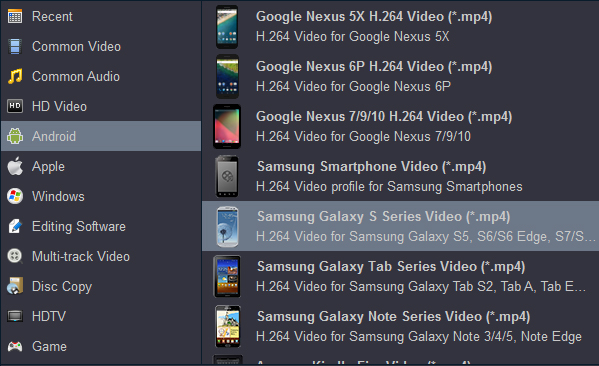 Tip: Before convert Blu-ray to Galaxy S20, you can click settings button to adjust the output parameters, such as resolution, bitrate, frame rate and others, if you don't need to adjust please skip this step.

The final step is to click convert button to start Blu-ray to Galaxy S20 conversion, the Galaxy S20 Blu-ray converter software will start the conversion immediately.

Video Converter Ultimate is the best version of Acrok soft video conversion software. I can play any format on my Galaxy S20 freely. Thank you very much
Scott Foster