The Samsung Galaxy Note series is a series of high-end Android-based phablets and tablets developed and marketed by Samsung Electronics. The line is primarily oriented towards pen computing; all Galaxy Note models ship with a stylus pen and incorporate a pressure-sensitive Wacom digitizer. On July 1, 2019, Samsung announced that it would hold its second Unpacked event of the year on August 7th at 4PM Eastern in Brooklyn's Barclays Center. The Galaxy Note 10 and Note 10+ was unveiled at the show.

With the development of Internet, a growing number of people have ditched the traditional ways of home entertainment especially like the broadcast TV, DVD and Blu-ray discs. Instead, users are more willing to stream online or download the movies to their portable smartphone which is convenient to carry and watch them anywhere they go. Thanks to large storage capacity and High video resolution, Blu-ray is very popular in current market. However, it can be so extravagant and pity to set aside or even abandon the Blu-ray discs where hold a sizable collection of favorite films. Is there a way to extract the movies out of your Blu-ray discs and play onto a Galaxy Note 20, 20 Ultra, 10, 10+, 9 or Galaxy Note 8?

It is a pity that, you can only hold a Blu-ray Disc and playback it on your Blu-ray Player on home. So have you imagine to enjoy Full-HD Blu-ray video whenever and wherever you please, even on the subway home?

Galaxy Note is not intended for playback of Blu-ray as it has no Blu-ray drive nor player to read the disc. Fortunately, we can make it possible with picking up a program called Blu-ray Ripper. When it comes to ripping Blu-ray for Android, IOS, Windows and Mac device, there are always some unavoidable issues concerning protection schemes. Luckily, our Blu-ray to Galaxy Note Converter (Acrok Video Converter Ultimate) has what it takes to vanquish the built-in disc restrictions like AACS encryption and the BD+ copy protection used on Blu-ray disc or DVDs. Therefore, you don't need a separate utility to decrypt your Blu-ray disc.

Acrok Video Converter Ultimate is an excellent tool that allows you to rip a movie from Blu-ray and convert into an Galaxy Note-playable movie file. And it also converts your Blu-ray & DVD & digital videos to other popular formats you need such as MP4, M4V, MKV, MOV, WMV, FLV, 3GP. Moreover, it gives you the power to freely customize the settings of output video, as well as personalize the video with a handy built-in editor to get the results exactly the way you want. For those who are running a Mac computer, please refer to Galaxy Note Blu-ray Ripper for Mac to convert your Blu-ray disc for playback on Galaxy Note 20, 10, 10+, 9, 8, etc.

Now, let's have a look at how this powerful Blu-ray ripping software make your movie viewing experience better by converting Blu-ray movies to your Galaxy Note phone.

How to rip and transfer Blu-ray to Galaxy Note for playing?

Here the detailed way to convert Blu-ray movies on Windows 10 is showed. The way to rip Blu-ray files for Samsung Galaxy Note in Mac is the same. Just make sure you've downloaded the right version.

Insert a Blu-ray disc onto Blu-ray drive on computer, and open up Blu-ray to Galaxy Note Converter. Click "Load Disc" located on the top left corner of the screen, then, choose your disc and click Open, and the software then scans the Blu-ray for the titles it contains. It takes time to upload a big batch of movies, and all the movie titles you choose are displayed on the main screen, accompanied by video parameters: output format, resolution, length and subtitle.

Choose you Samsung Note mobile from the Android output preset as the output format, which will remove all the incompatibility issue for you. Note that you can customize the settings for the output by specifying format and destination folder. 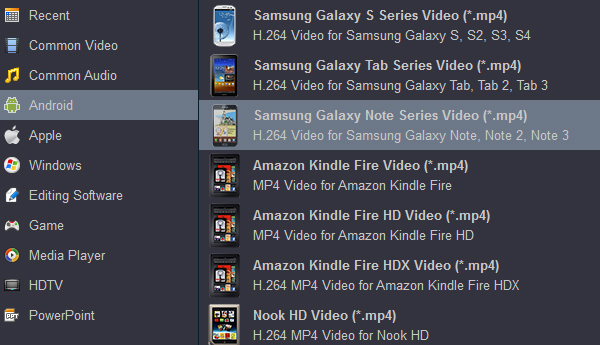 Tip: Though Samsung breaks through the age of only SD video playable on portable devices, some models have its limitation for 16GB or 32GB flash drive. So saving the space is also a trouble when you want to rip Blu-ray to Galaxy Note. You know a Blu-ray disc usually contains 25GB or 50 GB M2TS files. It is almost the entire storage of your Galaxy Note. So Acrok software helps you convert Blu-ray M2TS video to H.264 file. It will shrink your Blu-ray movie to relatively smaller file yet still keep excellent quality.

When you're ready, hit the blue "Convert" button at the bottom right corner to let go the Blu-ray to Galaxy Note 20, 20 Ultra, 10, 10+, 9, 8, etc., converting process and take a break. It will take anywhere for a few minutes to over an hour.

1. Unlock your Android device. 2. With a USB cable, connect your device to your computer.
3. On your device, tap the "Charging this device via USB" notification.
4. Under "Use USB for," select File Transfer.
5. A file transfer window will open on your computer. Use it to drag files.
6. When you're done, eject your device from Windows.
7. Unplug the USB cable.

I'm ecstatic! This worked the first time I tried it. I thought I''d give it a go so we could watch Blu-ray movies from my Galaxy Note 10 while we're anchored up each nite. I never thought this old dog could figure it out but a huge tip of the cap to Acrok and this program.
William Robb